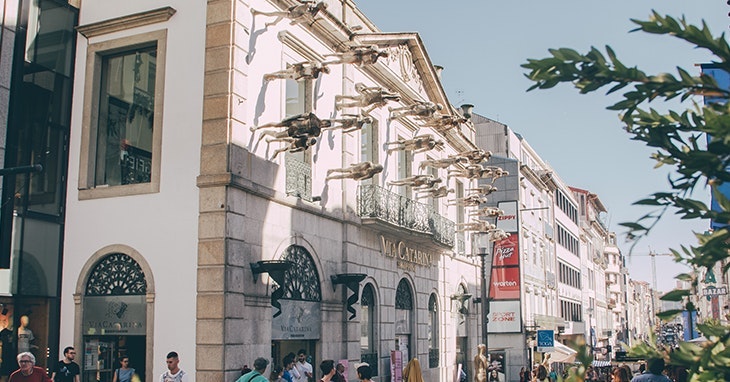 The building where ViaCatarina is located, was once the headquarters of O Primeiro de Janeiro, one of the most distinguished newspapers in Porto. The VIArtes contest came to be with the intention of enhancing one of the most iconic façades in the city, on one of the busiest shopping streets in Porto, Rua de Santa Catarina. Ever since the first edition of the contest, the winning works of art have transformed ViaCatarina’s main entrance exterior into a cultural happening that has captured everyone’s attention by adding a mark of modernity to one of the city’s oldest and most loved streets both by residents and tourists.

VIArtes’ first winning project, in the 2014 edition, was W(E)AVING by Nuno Pimenta and Frederico Martins. This work of art revolved around its actual construction by the volunteering passers by who participated in weaving the small parts that made up the whole. It combined the themes of weaving, as the constructive method and waving as the final result and visual effect created by the vivacious tapestry made by everyone who wanted to participate. The centre’s façade was covered by an enormously dynamic and visually impactful fabric, waving.

In 2015, VIArtes’ second edition, AZULagir by Alberto Vieira, ceramic artist and sculptor, and José Pedro Santos, architect and designer, was the winning project. The tile, a centuries-old Portuguese tradition, was the inspiration and once again members of the public were invited to participate. The resulting installation was composed by a representation of 66 tiles, the drawing based on a configuration of coloured funnels mounted on steel props which allowed for numerous geometric combinations using colour schemes. The public participated with several original mosaics, giving the work of art a human dimension, and representing the atmosphere of traditional popular parties characterised by joy, colour and social gathering.

The fourth edition, in 2017, saw The Factory of Dreams, by the architect Tomé Capa, as the winning project. This work of art “dressed up” ViaCatarina’s exterior in pink to “make dreams come true”. The pink façade, which left no one indifferent, created an atmosphere of fantasy and happiness as if producing dreams.

The winner of the fifth edition of the VIArtes contest was the designer and sculptor Paulo Ramunni whose work has been exhibited at the Museum of Modern Art (MoMA, New York) and throughout the world. The work of art he created has figures walking along the façade of the building as if pursuing an alternative path to the one most taken, the one the audience is walking on, Rua de Santa Catarina. Based on freedom, creativity and a difference in perspective, this piece has passers by contemplating ViaCatarina for a little bit longer.

We look forward to the next Edition of VIArtes. What will it bring? Who will be participating in it? We suggest you to keep an eye on ViaCatarina’s façade – you might just discover your next favourite artist…